The collision of tectonic plates along the San Andreas Fault system formed the San Gabriel Mountains. Bending of the fault produced their east-west orientation, unlike the general southeast-northwest alignment of most California mountain ranges. This “Big Bend” in the fault transmitted forces 180 miles down from Parkdale almost to Wrightwood in the big 1857 Fort Tejon Earthquake. Another “big one” could severely damage both the I-5 Tejon Pass and the Cajon Pass (see http://web.mit.edu/murj/www/v10/v10-Features/v10-f5.pdf). Visit the Cal Tech Seismo lab for a sobering preview of such a big one on the San Andreas Fault. (www.seismolab.caltech.edu/).

Follow the water   Native Americans settled on bluffs overlooking the Arroyo Seco draining the San Gabriel Mountains, including a major settlement at the mouth of Millard Canyon, near springs and artesian wells. Question, what are artesian wells?

Joseph Chapman, former pirate and the first Anglo settler in southern California, built a sawmill in Millard Canyon in 1817, on a tributary of the Arroyo Seco. Settlers referred to Pasadena as a mesa, as it sits above the Raymond Basin higher than its neighbors. Pasadena is a Chippewa word for “crown of the valley”. The first orchards, subdivisions, and settlements used water from springs along the Arroyo or from horizontal tunnels into the hills to tap the waters within.

The Indiana Colony   Judge Benjamin Eaton, a Harvard law graduate, was Circuit Court Justice, district attorney and tax assessor in Los Angeles in the early 1850s. He lived briefly at Rancho San Pascual, just east of the Arroyo, but his wife died. Returning in 1865 with a new wife, he lived on the Fair Oaks Ranch and helped Benjamin Wilson and William Griffin build “Wilson’s Ditch,” bringing water from Devil’s Gate in the Arroyo to their rancho. Daniel Berry, representing the California Colony of Indiana, reported a great find in 1873.

“The wood is plenty, the water delicious and cool, leaping out of the rocks on the side in little cascades.” Eaton built a water system for the new Indiana colony in 1874. He piped water from Devil’s Gate in the Arroyo to a reservoir near the present Colorado Street and Orange Grove Avenue. The city of Pasadena was chartered in 1886, after the postmaster rejected the name of Indiana Colony. The first major hotel in the San Gabriel Valley, The Raymond Hotel opened in 1886. The first street car line, horse & mule drawn, running down Fair Oaks to Raymond, opened September 30, 1886.

By 1900, people spoke of the “San Gabriel fruit belt”. The Arroyo was full of vineyards, fruit trees and other agriculture. There was no room for a sports stadium. Signs said, “No Chinese hired”. However, increasing population and increased pumping of water began to lower the water table, and some farms began to be abandoned. There were also squatters. This 1897 picture  shows squatters living near the present site of the Rose Bowl stadium.

This 1897 picture comes from the Pasadena Library digital archives

Mayor Horace Dobbins formed The California Cycleway Company in 1897 to build a profitable bicycle tollway from the Green Hotel in Pasadena to downtown Los Angeles. Only 2 km of this elevated tollway were built when it opened January 1, 1900. “On this splendid track cyclists may now enjoy the very poetry of wheeling … At Pasadena they may mount their cycles and sail down to Los Angeles without so much as touching the pedals….”-(Pearson’s Magazine). The new Electric trolleys and the beginning automobile craze doomed it. Profit-making Cycleways were logical in 1897. California had many of them, as you’ll see at http://la.curbed.com/archives/2011/10/19th_century_california_bike_routes_werent_too_shabby.php. 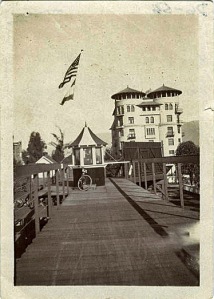 This public domain Wikipedia picture of the Cycleway was probably taken in 1904-5. You can see the Green Hotel behind the tollbooth.

Theodore Lukens, naturalist, Sierra Club member, and Pasadena city councilman, cherished the forests and mountain waters above Pasadena. See http://www.sierraclub.org/john_muir_exhibit/people/tplukens.aspx for his friendship with John Muir. He said in 1911 “Pasadena does not need to look elsewhere for water now or in the future, if she will take care of the watershed from which her supply of water now comes.” But times had changed; water was less plentiful and the first electric trolleys had come to Pasadena in 1895. Pasadena’s 1910 population was 30,291 and the red car system was booming. The Pacific Electric Railway system or red car line opened in 1901 and became the largest interurban electric railway passenger system in the world by 1911. Travel from Pasadena to Santa Monica or Long Beach was easy.